According to the World Bank in the World Development Indicators section of data, the organization’s aggregate measurement of the business lending rate is as follows,

The lending rate is the bank rate that usually meets the short-and medium-term financing needs of the private sector. This rate is normally differentiated according to creditworthiness of borrowers and objectives of financing. The terms and conditions attached to these rates differ by country, however, limiting their comparability.

The graph below is a look at lending in the United States in the last twenty years. 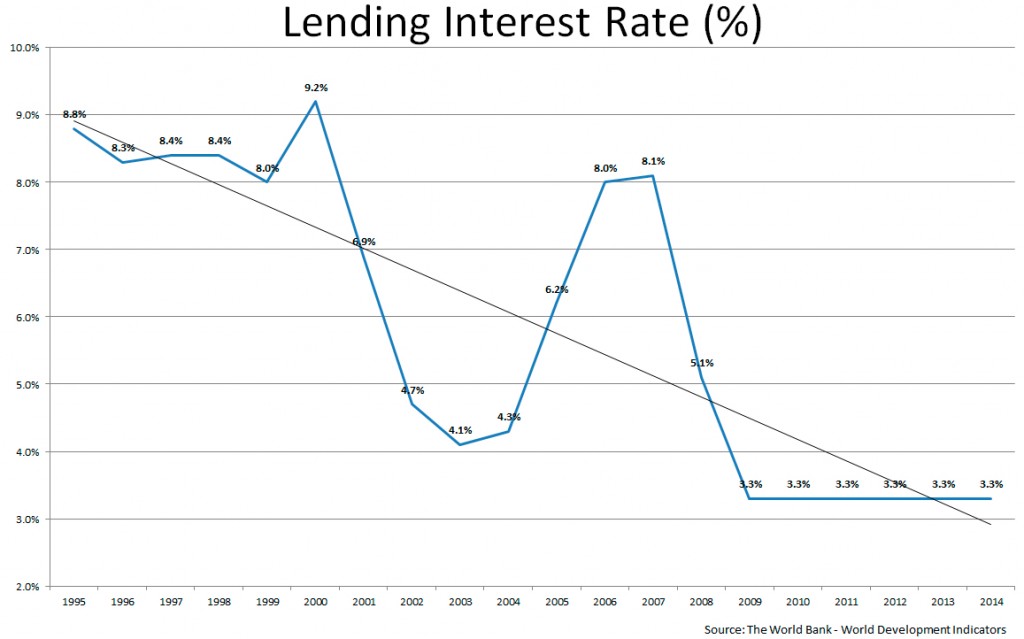 The same trend is substanciated by the FRED data set, Weighted-Average Effective Loan Rate for All C&I Loans, All Commercial Banks:

So money is still remarkably cheap. But what about capital investment, and its effect on productivity? Unfortunately, productivity is at a mysteriously low level as shown by the following FRED data. Notice the flattening trend in the last several years, after what started as a normal looking upward trend at the beginning of the last (and current) recovery:

A number of recent articles have drawn attention to this. One, in the Wall Street Journal, The Mystery of Declining Productivity Growth concludes that while certain hypotheses are plausible or even tenable (such as declining capital investment), we really do not fully understand why the overall decline in productivity:

Many current assessments point to the lack of capital investment, opting for the repurchasing of stock in order to boost earnings per share. In some cases, even accessing some of that cheap money in order to repurchase common stock. In another recent article in the Wall Street Journal, Behind the Chronic Weakness of Capital Investment draws an even stronger correlation between productivity and capital investment:

In 2014, real gross domestic product was 8.7% above the level it reached just before the onset of the great recession in late 2007, according to the Bureau of Economic Analysis (BEA), yet gross private investment was just 3.9% higher. Private investment net of depreciation—an even better measure of keeping up production and innovation capacity—was $524 billion in 2013 (the last year for which we have good data), compared with $860 billion in 2006.

The impact of weak capital investment is partially revealed by the slowdown in productivity growth. Bureau of Labor Statistics data show that labor productivity grew at an average rate of just 1.5% a year between 2005 and 2014, and by 0.7% a year since 2011. These numbers compare poorly with the average annual growth rates of 3.3% between 1948 and 1973, and 3.2% between 1996 and 2004. Business formation and venture capital funding have also slowed in recent years.

The article cites a number of interesting possibilities, but again, hypotheses (including “uncertainty”) followed by no certainty for the exact reason for the decline in productivity, but the conclusion is grave, “given its importance to productivity, economic growth and rising living standards, it is well worth the efforts of political and economic leaders to find a path to constructive change.”