Tesla surprised most readers with its blog post announcing in essence, and open source of its patented technology,

Tesla Motors was created to accelerate the advent of sustainable transport. If we clear a path to the creation of compelling electric vehicles, but then lay intellectual property landmines behind us to inhibit others, we are acting in a manner contrary to that goal. Tesla will not initiate patent lawsuits against anyone who, in good faith, wants to use our technology.

Immediately, our minds [rightly] go to the risk this represents, but in a post last month, the point was made that by tapping into the sharing power of the social era, Tesla may diffuse billions in costs it now shoulders alone:

Lured by the higher volumes, auto suppliers would also develop new parts, components and systems —software, brakes, charging devices—that would make Teslas run more effectively and lower production costs. Gas stations, start-ups, office buildings would build many more charging stations to accommodate the larger number of electric vehicles on the road. Utilities and real estate developers would start making home-charging stations standard rather than expensive extras. All of this would be a boon to Tesla. And the company might find it could start charging drivers of other electric vehicles for access to the super-charging network it has already built. And if electric vehicles were to rise in popularity, the government would likely offer increased support. Imagine if every rest stop on an interstate housed a rapid-charging station.

Navigant Research shows the following projections with a few continued, sluggish years that may be followed by a ramp up as collaboration pays off: 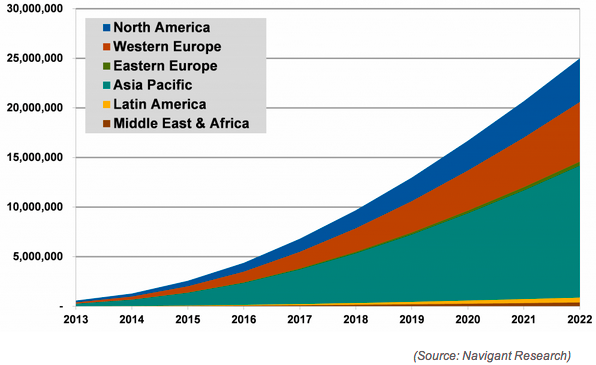 In a post on this topic, Navigant shares the possible benefit of collaboration among large manufacturers:

While the patent release by Tesla will surely increase collaboration with the major car manufacturers already producing EVs, it’s much less clear that open patents will move the dial on the major automakers who have largely steered clear of EVs in the past. Toyota, GM, and several other major players are hedging their bets on EVs, and Tesla’s patent release is unlikely to change their position…Increased collaboration between the major EV players could lead to this figure being achieved ahead of schedule.

Only time will tell of course, but this example of a fundamentally different way of doing business will be interesting to watch and hopefully, will turn out to some degree as expected.