CEPR economist Eileen Appelbaum gives a concise overview of some of the implications of the Dodd-Frank Act, which may not see its 8th year:

As memories of the great recession and financial crisis fade, the landmark financial reform law passed seven years ago today, in the aftermath of that economic disaster, is on the chopping block. A Republican Congress and the Republican President are intent on rolling back the provisions of the Dodd-Frank Wall Street Reform and Consumer Protection Act that have increased transparency and limited risk in our financial system. The Financial Choice Act, first introduced in Congress in 2016 by Texas Representative Jeb Hensarling, is poised for a comeback.

…Key provisions slated to be rolled back are those that kept private equity funds and hedge funds out of the shadows. In the first 30-plus years of their existence as major financial actors, private funds were able to structure themselves in ways that exempted them from the many laws designed to protect investors and enabled them to avoid regulatory scrutiny by the Securities and Exchange Commission (SEC). Dodd-Frank introduced oversight and regulation that has been a boon to investors in private equity. Now, Section 858 of the CHOICE Act proposes once again exempting private equity fund advisors from registration and reporting requirements. It states, “no investment adviser shall be subject to the registration or reporting requirements of this title with respect to the provision of investment advice relating to a private equity fund.”

Do we remember the NINJA loans? Or has it been too long – six or seven years? You know, loans made to folks with no income, job or assets for that matter. Does THAT sound familiar, and for that matter completely insane? Investopedia explains just why such loans are so risky,

While the specifics of any NINJA loan can change, most offer the lender a low initial rate, which is then increased after a few periods of payment. The borrower is hoping for the value of their property to appreciate significantly, allowing them to repay the loan with the newly found equity. However, when the property doesn’t appreciate, many borrowers cannot make the repayment.

This of course explains the full implications on the CDO market as outlined in an IMF paper which, oddly enough, seems less filtered by hindsight as it was written in 2008, so close to the mayhem and actually written in June of that year preceding the Lehman bankruptcy:

The damage was propagated at each stage of the complicated process in which a risky home loan was originated, then became an asset-backed security that then formed part of a collateralized debt obligation (CDO) that was rated and sold to investors.

The paper is worth a re-read as it underscores the fundamentals of the madness of the crowds, the reckless history of much lending activity (not the first time there has been a banking crash), followed by an absence of liquidity, panic, crash and finally, a backstopping by the government.

Of course the case of CYNK is quite different from the CDO market crisis mentioned above. But there are similarities of behavior, especially as they relate to knowingly engaging in fraudulent behavior, and the predictable irrationality of the crowd. And unfortunately, in the case of a pump and dump (or whatever this is), no backstopping is on the way.

Outside of those flipping round turns based on oscillators, algorithms and signals – the assumption is that this crowd knows what they’re doing – does anyone ostensibly investing in a security like this actually read, or even glance at the financial statements? And what about the qualitative data that should accompany the quarterly and annual reports, such as an absence of filing? No, unfortunately, all of the handwringing and analysis is pretty much foolishness. All you needed to know was the basic ‘NINJA’ equivalent found right there in the SEC filings: 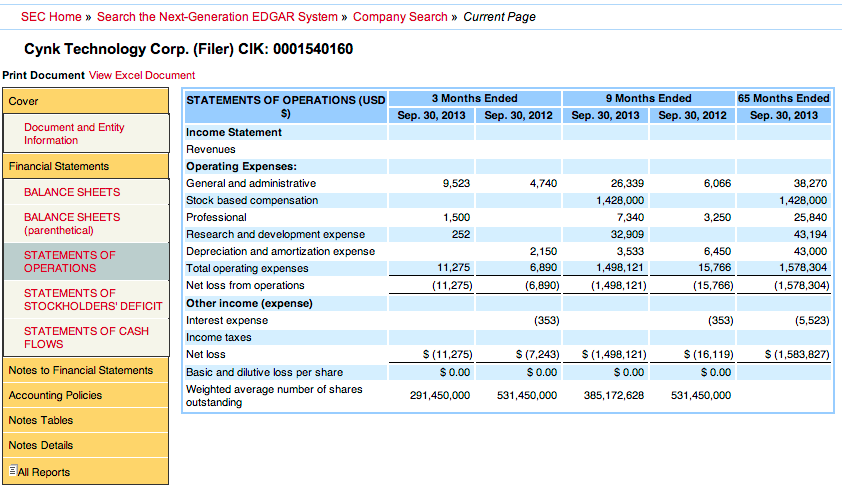 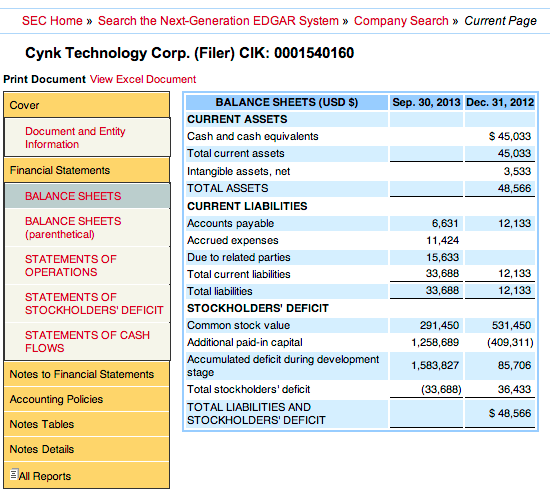 And finally, this, the footnote on going concern (emphasis mine):

Enough said. All the other anecdotes and, “meet the mysterious executives” behind the mythical unicorn, is just noise.