In our present time, where social is the model and connected is the norm, where is the disconnect between good ideas within the firm, and the application of innovation to make those ideas happen?  In my MBA program, we were introduced to what the authors considered a phenomenon known as the knowing-doing gap where, “firms tend to be better at generating new knowledge than at creating new products based on that knowledge” (Carpenter & Sanders, 2009).  Unfortunately, half the observation is true, but I’m not so sure it is a phenomenon as much as a process failure to recognize an evolution of corporate culture for about the last twenty years.

At the executive leadership level, the gap in knowing versus doing is sometimes the result of a vacuum that may exist between the most important thing for a manager to have occupying their time from a strategic point of view, over against the tyranny of an avalanche of unanalyzed information that often results in being mired down in details.  This is what William Oncken referred to as organizationally imposed time.  At the organizational level, the knowing-doing gap often results from a breakdown in the diffusion process within an organization, resulting in a complete alienation between line staff, leadership and executive leadership regarding daily operations and the mission, vision and values of the firm, and the strategic mandate to accomplish these goals.

One key function of executive leadership is filling the significant role of disseminator of information (to those who can be trusted to act on it).  Last year, I spoke with my manager and asked how an executive finance officer might succeed.  I was surprised that without hesitation she answered that a mastery of analyzing, filtering, diffusing and applying useful information that comes in the form of an avalanche, to the near and long-term needs of the organization is perhaps one of the strongest skill set components of the successful executive leader.  To successfully accomplish this is to break the cycle of the knowing-doing gap, and put in its place a collaborative approach that communicates the strategic design of the organization in appropriate doses to various personnel, and then inspires that staff to fulfill the mission of the organization using their distinctive strengths and expertise.

This is where the implementation levers come in, such as those cited by the same authors: 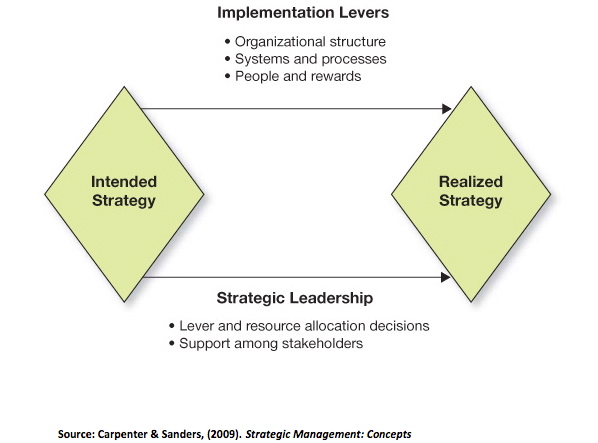 I would hasten to make a couple of points on such an over simplified illustration.  First, it is one thing to be a part of a firm with high ideals (these days identified as purpose), even with the right staff and skill sets in place.  But if the implementation, levers, stage gates, or whatever other mechanisms are not in place in the context of a connected work environment, the strategic design may as well not exist.  Additionally, there is also a point on the diagram regarding support among stakeholders.  Among the many stakeholders in an organization, I have found it near impossible to to get things done if you do not have executive sponsorship (or if you are in those ranks, those whom you report to).  For the last decade Apple Computer has perhaps been the best example for positively executing such a strategy infused with continuation of new knowledge.  This clearly ran up and down every strata of the organization.  The goal was simple yet profound, produce the very best products that actually converge art and science, the humanities with technology.  The result?  When in history have consumers every loved the products that they paid a premium to own?