When you think of the modern iteration of your local public library, a couple things might spring to mind, such as the perverts sitting at the computers offending everyone around them in the name of free speech. But another might be the question, how long can this model of an institution last? Well chalk one up for another blow to the hard and fast rule of disruption. I have observed the growing catalogue in recent years of digital material available for check out, including audio as well as e-books. But in the age of streaming versus download, the for-profit sector has started rolling out its own version of subscription based reading, and they face headwinds of an unlikely competitor, as noted in the Wall Street Journal, Why the Public Library Beats Amazon—for Now:

A growing stack of companies would like you to pay a monthly fee to read e-books, just like you subscribe to Netflix to binge on movies and TV shows. Don’t bother. Go sign up for a public library card instead. Really, the public library? Amazon.com recently launched Kindle Unlimited, a $10-per-month service offering loans of 600,000 e-books. Startups called Oyster and Scribd offer something similar. It isn’t very often that a musty old institution can hold its own against tech disrupters. But it turns out librarians haven’t just been sitting around shushing people while the Internet drove them into irrelevance. More than 90% of American public libraries have amassed e-book collections you can read on your iPad, and often even on a Kindle. You don’t have to walk into a branch or risk an overdue fine. And they’re totally free. Though you still have to deal with due dates, hold lists and occasionally clumsy software, libraries, at least for now, have one killer feature that the others don’t: e-books you actually want to read.

E-books you want to read? That’s right. So instead of an all-you-can-read list of digital titles with the equivalent of Smokey and the Bandit III, you have access to many of the titles from Amazon’s top 20 Kindle best-sellers of 2013 list with the following impressive results: 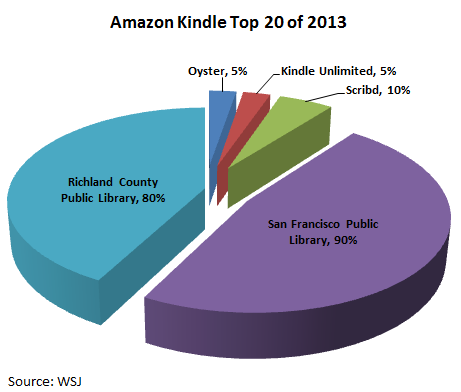 See the full grid from the WSJ article here. The article goes on to explain an interesting history of this windfall for local libraries:

How did library e-book collections get such a leg up? Amazon is locked in a hate-hate relationship with many publishers, so none of the five largest will sell their whole collection to Amazon for its subscription service…Over at the library, the situation is different. All of the big five publishers sell their e-book collections for loans, usually on the same day they’re available for consumers to purchase. They haven’t always been so friendly with libraries, and still charge them a lot for e-books. Some library e-books are only allowed a set number of loans before “expiring.”

There are obvious limitations to free services, such as availability, wait lists and time span for checked out materials. But for now, this is a terrific example of a public institution in the local community showing itself able to respond to disruptive forces, and provide viable resources to a wider audience with limited resources. It is also an excellent example of how a business model can benefit from adapting to a model that helps a local community as “publishers have come to see libraries not only as a source of income, but also as a marketing vehicle…since the Internet has killed off so many bookstores, libraries have become de facto showrooms for discovering books.” See brief overview here: