Barry Ritholtz has written an assessment of Greenspan’s career which spanned multiple decades and used it as somewhat of a chopping block pointing out both inconsistencies, enigmas and outright head scratcher anecdotes from his career. I will never forget reading Greenspan and Kennedy’s paper, Estimates of Home Mortgage Originations, Repayments, and Debt On One-to-Four-Family Residences (written a good deal before the crash) where the authors discuss regular mortgage debt outstanding (RMDO) from the Federal Reserve Board’s flow of funds accounts where couple of things really stand out, of course, now through the filter of hindsight. Specifically, how “extractions” of home equity were to be paid back. The methods outlined were, “those resulting from refinancings, cancellation of debt by home sellers (separated into foreclosure sales and all other sales), unscheduled mortgage repayments, and scheduled amortization.” The first two mentioned should have been a warning of alarmist portions, namely, the idea that extractions were simply going to be paid back by papering over them with more debt, and certainly this happen for a while. But also, the assumption that there was always going to be someone who came along behind you and got into more debt than you did. The data from this paper spans through 2004, two years after the following activity pointed out by Ritholtz in, Celebrating Greenspan’s Legacy of Failure:

Amid the 2001 recession, and immediately following the Sept. 11 attacks, the FOMC brought rates down to new lows. Rates were under two percent for three years, and at one percent for a full year. This was simply unprecedented, and the impact was severe. Everything priced in dollars ramped higher. Inflation expanded rapidly, Gold began a decade-long bull market, and oil increased from about $20 to almost $150. The housing market took off, and rose faster and higher than ever before, setting up the inevitable denouement.

The result was clearly illustrated in the tables of Greenspan’s working paper from 2005, asset inflation: 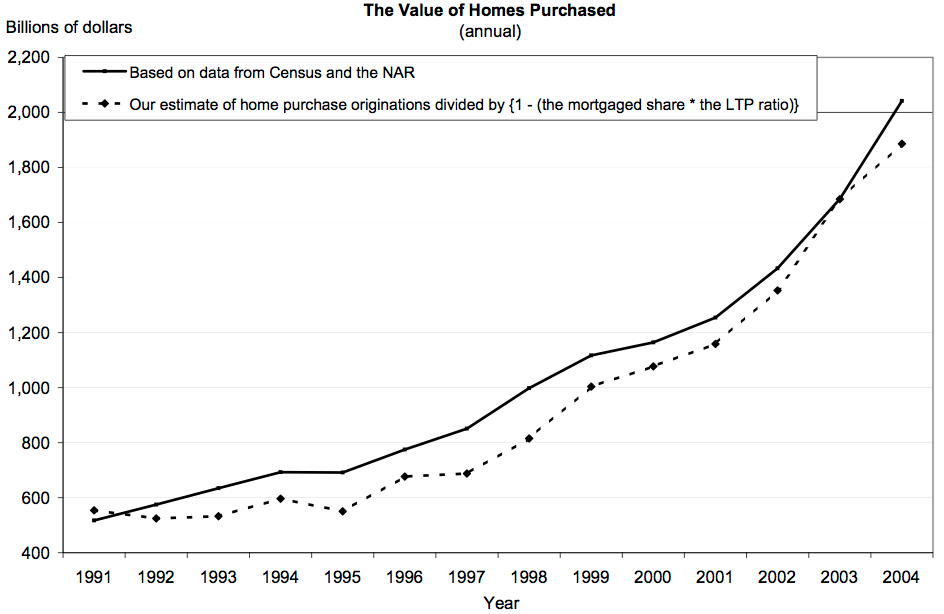 But this was not seen as a cause for alarm, as reflected in the Chairman’s words from a year earlier,

In evaluating household debt burdens, one must remember that debt-to-income ratios have been rising for at least a half century. With household assets rising as well, the ratio of net worth to income is currently somewhat higher than its long-run average. So long as financial intermediation continues to expand, both household debt and assets are likely to rise faster than income. Without an examination of what is happening to both assets and liabilities, it is difficult to ascertain the true burden of debt service. Overall, the household sector seems to be in good shape, and much of the apparent increase in the household sector’s debt ratios over the past decade reflects factors that do not suggest increasing household financial stress. And, in fact, during the past two years, debt service ratios have been stable.

As pointed out by Ritholtz, in the end, “Greenspan ultimately conceded there was a “flaw” in his market ideology. Easy Al, as traders had taken to calling him, recognized that allowing radical deregulation of credit markets was a mistake, as was opposing rules on derivatives and ignoring the subprime and non-bank lenders at the heart of the financial crisis.” In light of this, it’s no wonder at all that there is continued discussion of the complexities caused by headwinds five years after the official end of economic recession.