This Day In Market History: The Debut Of The Edsel, Ford’s Biggest Flop…in 1957, Ford Motor Company unveiled the Edsel.

The Edsel is infamous as Ford’s costliest mistake in history. Experts estimate the Edsel cost Ford roughly $350 million ($2.3 billion in 2016 dollars) in losses, or roughly $3,200 per vehicle sold.

Experts cite a U.S. economic recession, the Edsel’s unappealing name, poor marketing, unreliability, unappealing design and other of potential explanations for the car’s poor performance in the market. Whatever the reason, Ford discontinued the Edsel in 1959, just two years after its launch. 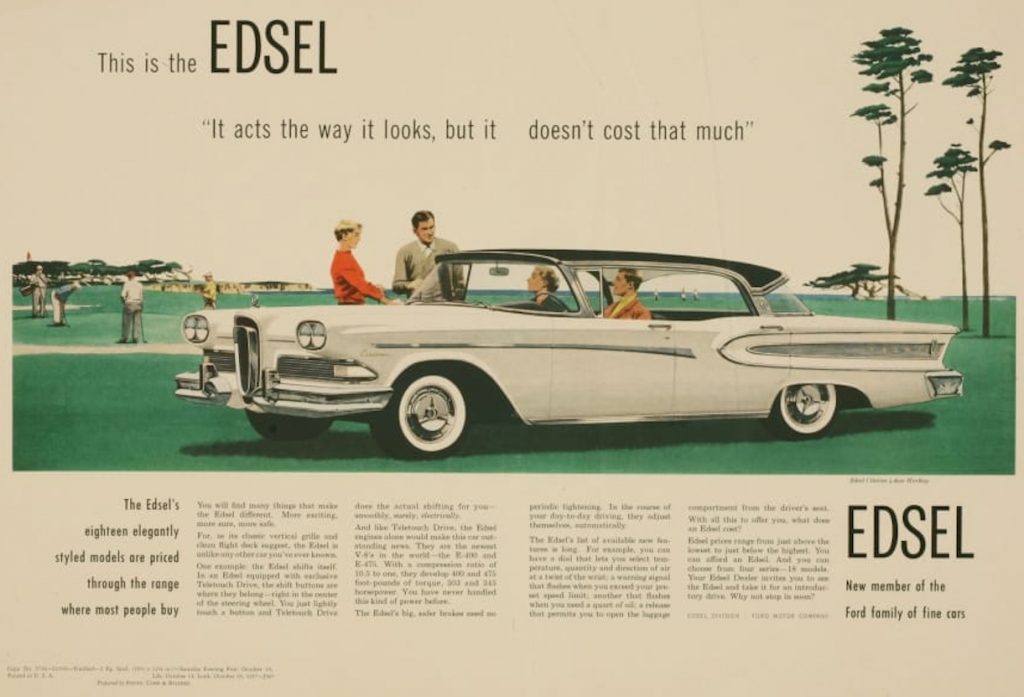 It is difficult to imagine this kind of event in the age of NFTs and red hot IPOs (that in some cases we may not be entirely sure what it is the company will produce, if anything). a Washington Post article concluded, “the idea for the Edsel came from Ford executives who were thinking about market niches when they should have been thinking about cars.” But the story is still cautionary from the standpoint of hype, and consumer sociology as the Edsel ultimately failed:

because consumers did not buy it…in reality, however, Ford terminated the Edsel largely because shortly before Ford introduced the car a change in leadership brought a change in corporate strategy that made the Edsel irrelevant to Ford Motor Company’s (FMCs) long-range plans (Dicke, 2010).

The same author in an interesting assessment of what went wrong strategically concludes:

The Edsel was also a reassuring failure in the sense that it in no way challenged the basic soundness of the American economy. As the Wall Street Journal pointed out in its editorial/obituary, consumers could reject any product for any reason or for no reason. After the 1958 model year people rejected the Edsel because they did not like the brand not because it had any serious mechanical deficiencies. Consumers could afford to reject a US$ 250 million investment by an automaker for trivial reasons because they had faith that the auto industry could absorb the loss and come up with something more in tune with their tastes (Dicke, 2010).