A History of Entrepreneurship

As someone who grew up with entrepreneurial parents, I can say without hesitation that there is no job experience that can completely compare with the rewards and perils of such a career path.  Although many would prefer to be employed, even employed by large or in the past, bureaucratic organizations, many of those employed in the U.S., as we all know, are employed by small businesses (using the basic standard of five hundred or less employees).  A quick look at the data shows this interesting breakdown (click the image for a larger view): 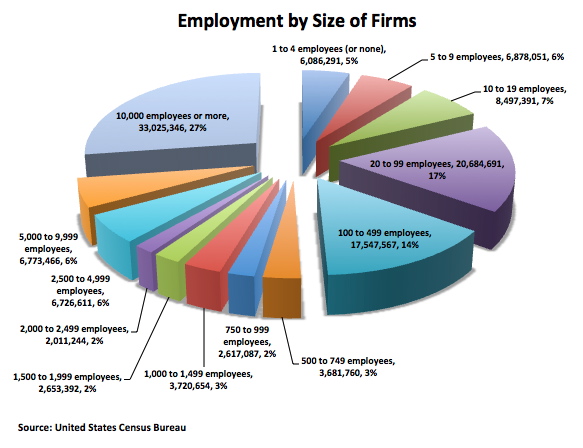 I think these numbers are even more felt using the same data set to see the number of firms falling into each category by headcount: 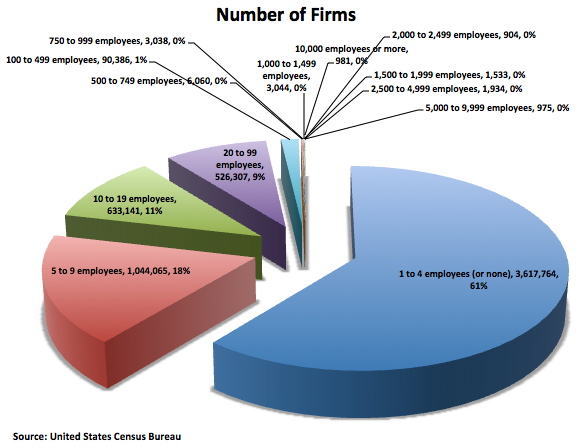 There are a number of conclusions or extrapolations that might be drawn from this data but the one I have in mind is of a more anecdotal nature: entrepreneurship is inherent in our culture here in the States, and always has been.  With sixty-one percent of the number of firms in existence ranging from one to four employees (or solopreneurs), an honest question springs to mind, where does the majority of innovation come from?  Some might consider this a self-obviating question.  But there has been a tension between two views such as the academic explorations of Schumpeter where on the one hand, innovation originates at the purely entrepreneurial level, and on the other, the titanic example of the industrial age where larger organizations simply had more capital to throw at a problem or challenge, and more to gain if successful.  But I am interested in the actual connection between entrepreneurship and innovation.

The Link Between Entrepreneurship and Innovation

In an article connecting these two topics, David Holt outlines the link between entrepreneurial characteristics, and how innovation comes to be.  As the author points out, creativity and innovation, though distinct, are related through their common goal of producing something new.  It is this inherent desire for something new, unique, better or more successful the drives the entrepreneur.  There are many who might appreciate some or even all of these attributes, but that is not the same as being driven by them.  Within the process of creativity, Holt describes the term Synectics, derived from the Greek word συνεκτικός (sunektikos).  This term is packed with meaning revolving around the idea to “fit for holding together; to be created along with…[or even] the essence of the argument, the most essential” (Liddell & Scott, 1889). 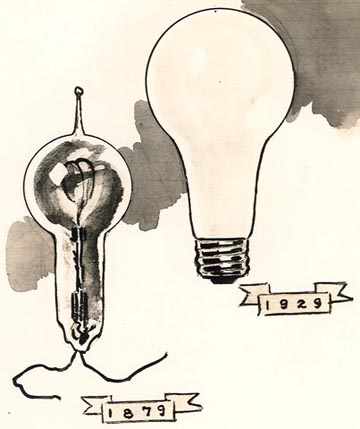 This concept has the idea of ruminating on a problem or challenge, whether consciously or unconsciously until there is some sort of breakthrough.  Again, it is human nature in general to desire resolution to a problem, but something essentially different to be driven by this desire.  This is what makes the entrepreneur as an innovator different.  The successful innovator is able to drive this creativity, in the form of a project to some sort of completion, ultimately in a product or service.  This is far more easily said than done.  One method for strengthening this process is the use of both brain hemispheres.  One of my favorite authors had a greatness that was in part, derived from both sides of his brain being so highly developed with logic, rhetoric, linguistics and grammar on the one side, and the ability to write creatively on the other.  So too the innovator must tap into both strengths, and surround herself or himself with people possessing complementary strengths, and rightly apply them accordingly.

Application for the Rest of Us

How do these principles apply to those who do not work within the ranks of an exciting, dynamic environment that is built around innovation, technology and entrepreneurship?  Decades ago one author suggests “continuous reconfiguration” which not only came to pass, but is truly the spirit of the age, and perhaps a major key to a firm’s survival and prosperity.  The same principles that drive the entrepreneur-innovator can and do exist within the ranks of larger organizations and even government.  Limitations certainly exist, and are likely to vary from one leader to another, as well as different teams, but no set of circumstances within an organization is beyond process innovation.  It begins with leadership establishing an environment that is driven by learning, continuous improvement, collaboration and a freedom to act.  Oddly enough, none of these are new ideas, but the application of them has, and is changing as technology changes, markets change, and ultimately, how we do business changes.