We are a full-orbed panic buy culture, and current behavior would indicate this will be the post-pandem norm as noted the other day:

But now it is bleeding over into corporate panic buying due to supply chain restraints. From Yahoo Finance, The World Economy Is Suddenly Running Low on Everything:

A year ago, as the pandemic ravaged country after country and economies shuddered, consumers were the ones panic-buying. Today, on the rebound, it’s companies furiously trying to stock up.

Mattress producers to car manufacturers to aluminum foil makers are buying more material than they need to survive the breakneck speed at which demand for goods is recovering and assuage that primal fear of running out. The frenzy is pushing supply chains to the brink of seizing up. Shortages, transportation bottlenecks and price spikes are nearing the highest levels in recent memory, raising concern that a supercharged global economy will stoke inflation.

Copper, iron ore and steel. Corn, coffee, wheat and soybeans. Lumber, semiconductors, plastic and cardboard for packaging. The world is seemingly low on all of it. “You name it, and we have a shortage on it,” Tom Linebarger, chairman and chief executive of engine and generator manufacturer Cummins Inc., said on a call this month. Clients are “trying to get everything they can because they see high demand,” Jennifer Rumsey, the Columbus, Indiana-based company’s president, said. “They think it’s going to extend into next year.”

The difference between the big crunch of 2021 and past supply disruptions is the sheer magnitude of it, and the fact that there is — as far as anyone can tell — no clear end in sight.

An end in sight is yet to be determined but these constraints are certainly related to some of the short-term inflation that is currently being somewhat over-reported but still exists, “essentially what people are telling us to expect is that it’s going to be hard to get supply up to a place where it matches demand.”

As expected, the CPI news release (April 2021) today shows significant inflation, as that has been the anecdote from almost everywhere. The surprise is just how much and how fast:

The Consumer Price Index for All Urban Consumers (CPI-U) increased 0.8 percent in April on a seasonally adjusted basis after rising 0.6 percent in March, the U.S. Bureau of Labor Statistics reported today. Over the last 12 months, the all items index increased 4.2 percent before seasonal adjustment. This is the largest 12-month increase since a 4.9-percent increase for the period ending September 2008.

Pent up and bottlenecked economy

The question is why this pace of increase or does this signal long-term problems. The most immediate causes relate to the re-opening of the economy. From MarketWatch:

The pace of inflation has surged after years of languishing at unusually low levels largely due to the rapid reopening of the U.S. economy.

Businesses can’t keep up in demand, a problem exacerbated by ongoing bottlenecks in the global trading system tied to the pandemic. Computer chips are especially in short supply and that’s held up production of new autos and other manufactured goods.

Americans are also rushing to dine out, travel or go far away for vacation, activities they shied away from during the pandemic. That’s also driving up prices at popular vacation resorts and other venues where people plan to congregate.

The first two reasons are pretty straightforward, but the third reason (pent up demand) is beyond question, even if this one is the most difficult to measure as it’s anecdotal and not enirely precise but we all observe it – everywhere is packed with people looking to get out and do something, anything. But the impacts are real and tangible as seen in the BLS data: 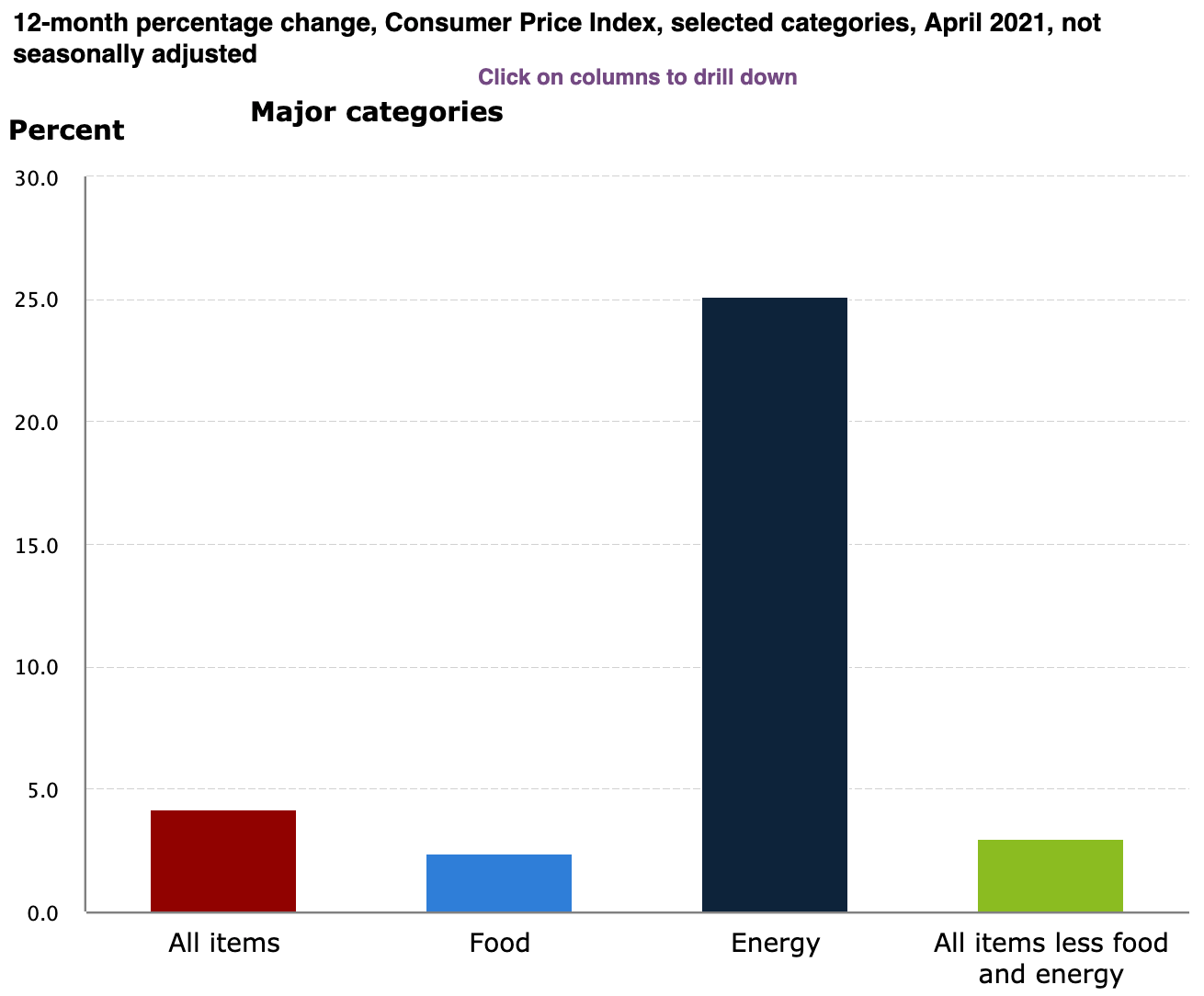 California’s population dipped by 182,083 residents last year, bringing the state’s total to 39,466,855 people as of January 1, 2021, according to new population estimates and housing data released today by the California Department of Finance (May, 2021).

The press release also reports that some of the decrease was attributed to excess deaths in 2020:

The COVID-19 pandemic increased California deaths in 2020 by 51,000
average death rate for the three preceding years. “Excess deaths” rates above the past threeyear average – were observed in 51 of the state’s 58 counties.

But the story is a mixed bag – there is significant growth in a number of inland cities, northern and southern but certainly not limited to those areas as illustrated in the interactive graphic from Cal Matters (see Cal Matters excellent write up here).

A post in the Wall Street Journal last week reported pre-pandemic levels of consumer confidence and for good reason(s), “as more people received vaccinations, stimulus payments reached households and businesses more fully reopened.” Employment, stimulus, an opening economy, vaccinations – all very compelling and obvious drivers to an overall feel of things, as well as the continued disucssion of inflation and how this will shape policy choices in the mid to long-term.

The University of Michigan Surveys of Consumers shows a consistent trend (with the next update in two weeks):

The survey adds the following commentary on inflation the finds support for either direction with:

Each side in the current policy debate finds support in the consumer data. The recovery is far from complete as less than half of the fall in consumer sentiment has so far been recovered, and the current and prospective stimulus and infrastructure spending has the potential to spark a renewed inflationary psychology, although that will not occur immediately…

Inflationary psychology preceded actual inflation by about two years in the last bout in the 1970s. The key balance is not to underestimate the ultimate impact of those policies on jobs and inflation, and not to overestimate the ability of policies to bring any excesses to a painless soft-landing.

Similarly, in the May 1 Berkshire annual meeting Buffett noted on the one hand the last 20 plus years, “was not a highly inflationary period as a whole,” but what they are seeing is:

…very substantial inflation. It’s very interesting. We’re raising prices. People are raising prices to us, and it’s being accepted. Take home building. We’ve got nine home builders in addition to our manufactured housing operation, which is the largest in the country. So we really do a lot of housing. The costs are just up, up, up. Steel costs, just every day they’re they’re going up. And there hasn’t yet been because the wage stuff follows. The UAW writes a three-year contract, we got a three-year contract, but if you’re buying steel at General motors or someplace, you’re paying more every day. So it’s an economy really, it’s red hot. And we weren’t expecting it.

When asked in the Q & A his thoughts on the worry of “more inflation or that we will have a pretty dramatic fiscal monetary collision,” Buffett diplomatically answered, “we don’t know.”

While the Fed continues its stimulus through low rates and bond buying, optimistic news continues as reflected in the following (and practically everywhere) which raises questions about the path forward:

Of course those articles that were suggesting no action yesterday were right per the concensus. But the question remains for economists and investors: how much good news (and at what rate of recovery) is too much? As quoted in Reuters, “we do feel that a higher inflation reading this year and in 2022 will prove to be not transitory, that the Fed will hit that 2% threshold and above, if not even higher, on a more sustained basis. So that’s where I think we would be on the side of disagreeing with Chairman Powell, that we think inflation is going to gain a toehold.”

As somewhat expected, the transcript from the Fed Chair today indicated no expected change to rates or bond buying activity in the immediate future. This prompts questions from economists regarding how long this can last given the good news that continues to emerge. For instance:

Economists think a decision to taper is months away although a minority think the Fed might start discussing the issue in June. Fed officials have said they want to see “substantial further progress” in meeting their goals of full employment and 2% inflation before tapering.

The post goes one to cite the recurring themes of optimism, inflation and pandemic risks as potential drivers for a change in policy.

Chair Powell reiterated that, “the FOMC and I kept interest rates near zero and maintained our sizable asset purchases. These measures, along with our strong guidance on interest rates and on our balance sheet, will ensure that monetary policy will continue to deliver powerful support to the economy until the recovery is complete.” Again, no surprise, but he continues, “while the recovery has progressed more quickly than generally expected, it remains uneven and far from complete.”

But one brief comment also describes some of the most felt implications of Federal and local policy decisions (and recovery):

The economic downturn has not fallen equally on all Americans, and those least able to shoulder the burden have been the hardest hit. In particular, the high level of joblessness has been especially severe for lower-wage workers in the service sector.

In conclusion, the Fed will:

Which will in turn extend the trend of low interest rates, housing prices and asset inflation of all kinds.