Earlier this week MotorIntelligence released its update and SAAR data. As expected, sales are somewhat reduced on a year-over-year basis: 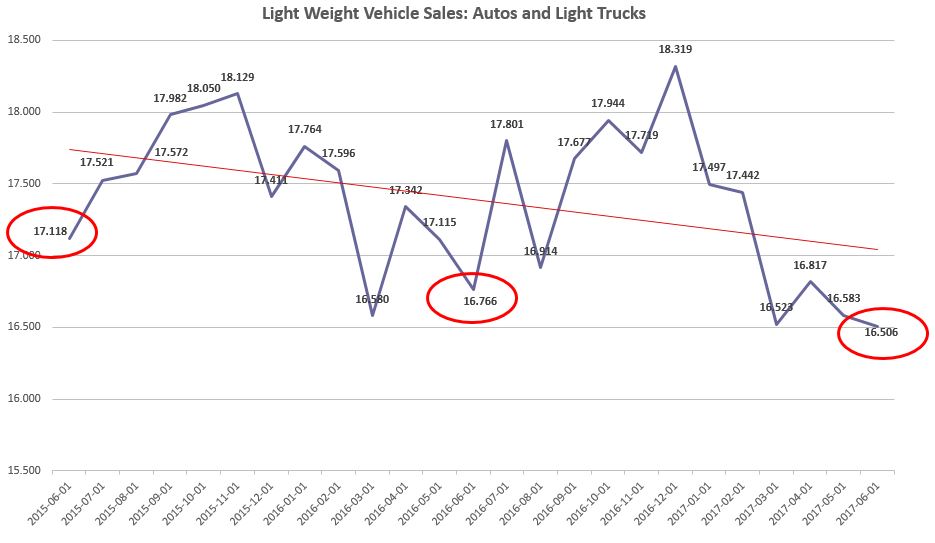 Most notably, the seasonally adjusted annual rates for autos are continuing to fall with truck sales continuing to post positive results for most manufacturers – Nissan with a whopping 21% + year-over-year truck sales with an additional 73,186 units sold over the prior year (though the company’s total car sales are off almost 12%). The Wall Street Journal cites that part of the reason for reduced sales is due to fewer vehicles being sent to rental companies:

The move away from rental sales reinforces a newfound discipline for domestic players that have been riding a seven-year growth streak since GM and Chrysler sought bankruptcy protection in 2009. The Detroit 3 reported tens of billions in profits during that span, bolstered by tailwinds from falling gas prices and surging demand for profit-rich trucks and SUVs.

Overall industry demand softened over the first half of 2017, however, falling about 2% through six months, according to JD Power. The development ushers in an expected plateau for auto sales, an important driver for the broader U.S. economy.

The fleet-sales pullback is having a disproportionate impact on wider volumes. Sales to retail customers at dealerships is down less than 1%, but sales to non-retail customers such as government fleets, commercial buyers and rental-car companies is off 7.8%, according to JD Power.

As mentioned previously, this was not unexpected given the volume of auto sales in the last three years that have extended beyond most expectations. Auto manufacturers seem to be signaling more slowdowns as the New York Times reports:

Automakers said this week that sales dropped in June for a sixth consecutive month, falling by 3 percent from a year ago, a trend that analysts do not see letting up anytime soon. And as demand falls, there is less work in the nation’s auto-assembly plants — primarily those that build traditional passenger cars…scaling back jobs in car plants is part of a newfound discipline among automakers to avoid bloated payrolls and inventories when sales start slipping.

While this trend is not all that alarming, two things are worth noting in this “post peak” period, both related to the financing of new vehicles and leases. The first is from Edmonds.com, where based on their analysis:

The average loan term for new vehicles soared to a record high of 69.3 months in June, an increase of 1 percent from June 2016 and up 6.8 percent from five years ago. In addition, the average amount financed by new-car buyers jumped to $30,945, which is a 2.6 percent increase from this time last year and 17.2 percent more than five years ago. And the average monthly car payment is now $517: That’s 2.1 percent more than in June 2016 and an 11.3 percent increase over five years.

In addition, according to the St. Louis Federal Reserve, close to $400 billion has been added to securitized loans as a result of auto sales in the last five years. Unless this trend continues, it could put a dent in sales: 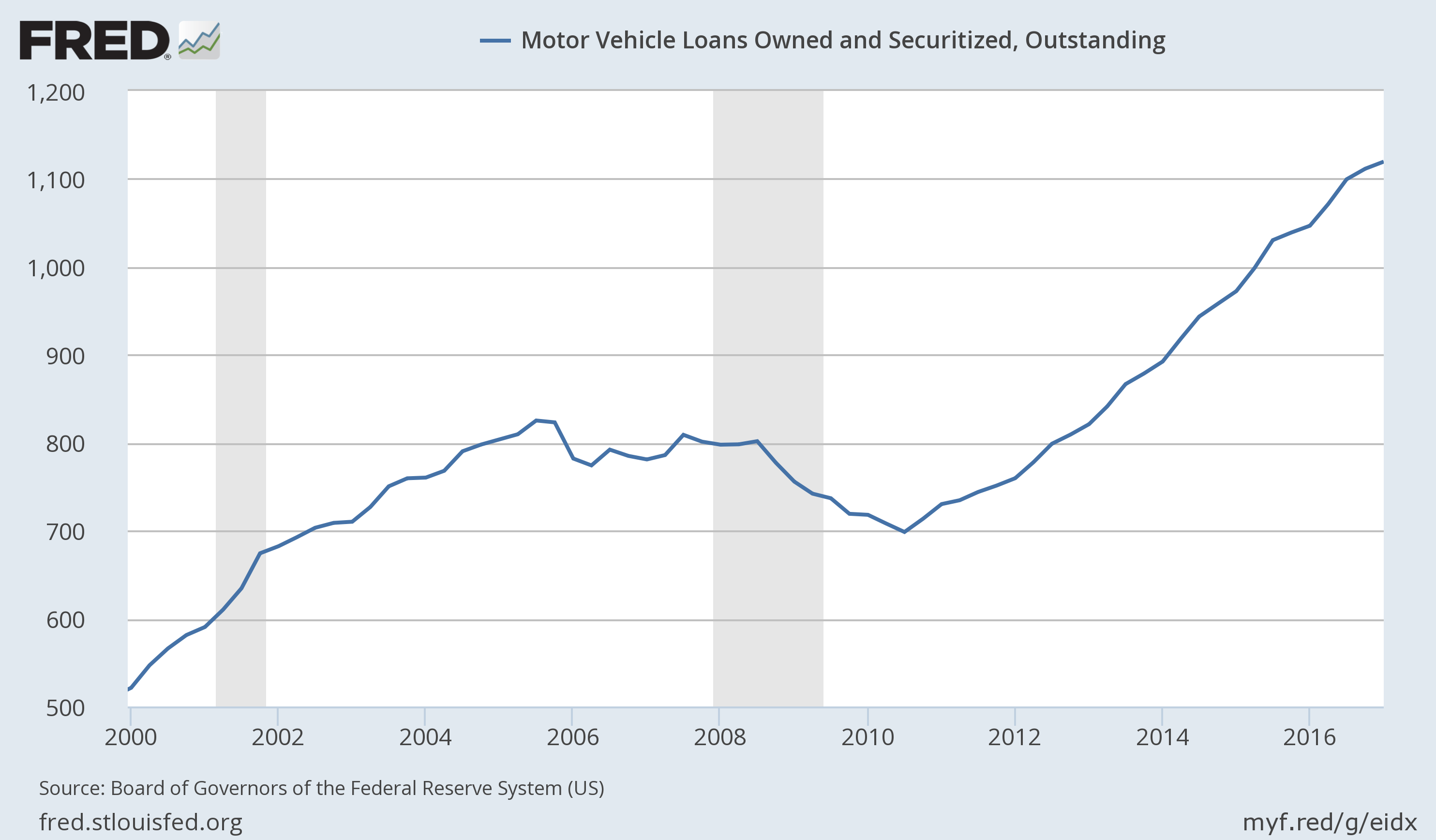 It was a record year at the Port of Los Angeles:

Attributed to the success is cited as understanding:

…”the importance of innovating and collaborating to move our economy forward,” said Mayor Eric Garcetti. “We have seen incredible progress over the last two years, and it speaks to the hard work and partnership between the City, business leaders, and the workers who keep our port running smoothly every day.”

The Port finished the year strong, with December volumes of 796,536 TEUs, a 27 percent increase compared to the same period last year. It was the Port’s busiest December and fourth quarter in its 110-year history. Overall in 2016, cargo increased 8.5 percent compared to 2015.

The end of the calendar year 2016 showed the following shipment activity: To put this milestone into perspective, look at the same time span filtered to total containers only (this illustrates the long crawl forward since the mid-2000s): 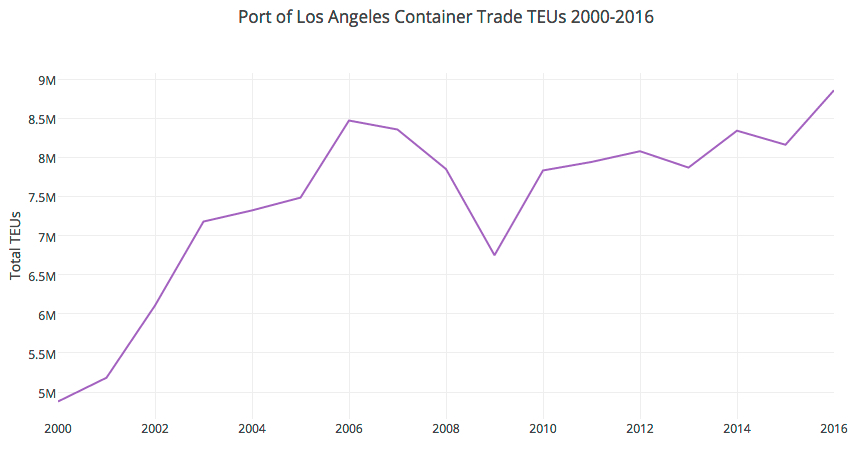 The Port of Long Beach had a little different year, but still posted strong results in spite of challenges:

Slowed by industry headwinds and challenges that included a major customer declaring bankruptcy, the Port of Long Beach still moved almost 6.8 million containers in 2016, its fifth best year ever.

Overall cargo declined 5.8 percent in 2016 compared to 2015, as the Port was impacted by new ocean carrier alliances and the August bankruptcy of Hanjin Shipping, a South Korean company and former majority stakeholder at the 381-acre Pier T container terminal — Long Beach’s largest.

By year’s end, the Harbor Commission had approved an agreement for a subsidiary of Mediterranean Shipping Co., one of the world’s largest container ship operators, to take sole control of the long-term lease at Pier T.

…“Last year was turbulent, with numerous ocean carrier mergers and other changes,” said Harbor Commission President Lori Ann Guzmán. “Now we have one of the largest ocean carriers in the world as a major partner and we’re well positioned to rebound in 2017. While the industry strives for equilibrium, Long Beach will continue be a reliable port of entry and continue to provide the fastest, most efficient services for trade from the Far East.” Again, the change in volume since the mid-2000s is even more felt when viewing total containers only:

Anecdotally, have you taken a mental note of how much you spent this year? More or less? This is not a scientific method by any means but, did the stores seems busier than in the past? According to the National … END_OF_DOCUMENT_TOKEN_TO_BE_REPLACED