Although the deployment of a number of technologies may have been delayed due to the pandemic, others may accelerate as a result of it. Just as the pandemic and lockdown removed the barrier (now 20 years into the 21st Century!) for paperless workflow in the office, remote meetings, remote work, education disruption, etc., others may be demanded and accepted for a number of reasons and preferences in a post-pandemic world as noted in the Wall Street Journal:

“Over the last 100 years you can’t really say the car was designed around the people; they got what space was left over”…

…As the auto industry contemplates the impact of technology—from electric cars, internet connectivity, and ultimately vehicles that drive themselves—designers are reinventing the interior of the automobile and how its passengers experience the ride. One doesn’t have to imagine some fantastic future with Jetsons-like inventions zipping around on the ground and in the air because the future is already on the drawing boards of car makers today.

What is most striking in these automobile innovations (and very consistent with the unfolding of the whole pandemic response) is the great reversal that cars now represent as a “safe space.” This of course is it due to both the inherent risk of traveling as well as the potential inconvenience of protracted wait times (or potentially getting stranded). So traveling within a large state such as California, people may simply choose to use their cars. The “oasis” concept revolves around the eventual full engagement of self-driving vehicles, technology with “head up” screens and embeded within the window, space utilization for sleeping, and ride-hailing/self-parking, all designed to prividing to create a viable and formitable competitor to air travel. 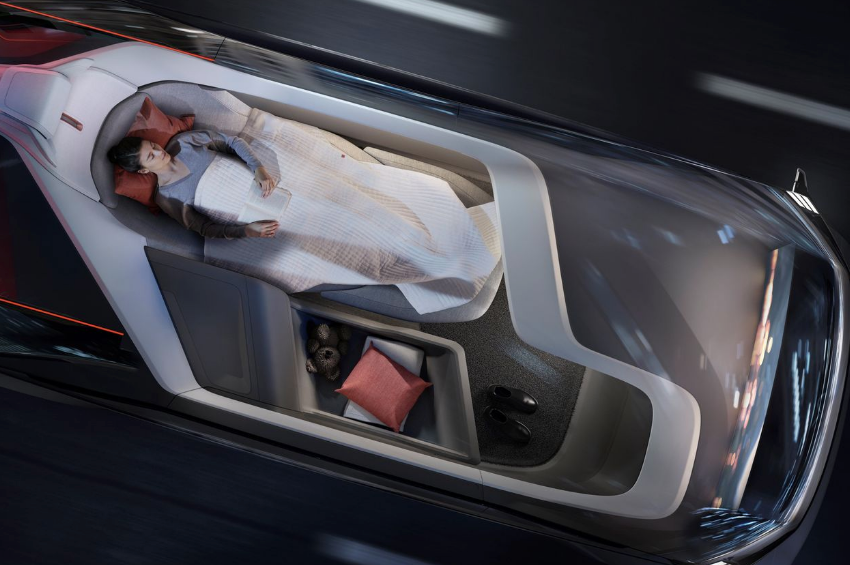 Again, what is most interesting is that these concepts are not new, but the demand may entirely shift due to the realities of a post-pandemic world. See the full WSJ post here.

If you think the history of the silicon chip is a cure for insomnia, think again. Two quotes (or as close as I can remember) say it all, the first, regarding breakthroughs. “Breakthroughs historically do not just happen. They are a product of when the time is right, and the time has come for such a thing.” So on the one hand, we can strive for excellence and push for a culture of creativity and this will certainly produce positive results. But especially in the case of a radical and essential breakthrough, one that we would look back on as disruptive to a system, technology, culture or business, the convergence of events is just as important as the components driving the change.

From the PBS Introduction:

Led by physicist Robert Noyce, Fairchild Semiconductor began as a start-up company whose radical innovations would help make the United States a leader in both space exploration and the personal computer revolution, changing the way the world works, plays, and communicates. Noyce’s invention of the microchip ultimately re-shaped the future, launching the world into the Information Age.

The next quote, regarding timing and demand as they relate to the brilliance behind groundbreaking change. “Brilliant people exist all the time. It’s matching up a brilliant person in the right place, at the right time when people want what that brilliant person has to offer.” We can push and push for change or a breakthrough idea, but ultimately, the timing of that change must correspond with demand in order to harness the brilliance that will fuel the progress.

In our time, there is a new requisite skill set: being a futurist. A futurist was once only an avocation among the best of thinkers, and somewhat of a novelty and a subset of sociological and economic studies. It is very interesting to read authors like Alvin Toffler or Peter Drucker (along with a number of others) and observe how they saw things sometimes dimly, but often very clearly that were seemingly hidden to others. But it has been decades now since the advent of the information age and the decline of the industrial era. What this has created is an environment where it is no longer an option but to take charge of one’s future, in terms of actively, deliberately and even aggressively engaging in activity that is inherently future in its benefits. To a certain degree, success means understanding the future is simply not an option.

Problem solving has always been a core skill of leadership, but increasingly, this skill as a requirement has migrated to the average employee. To make this even more complex, the motif we hear regarding the next generation of leaders is the ability to solve problems that do not yet exist. Just to name a few, an article from futuristspeaker.com from several years ago cites:

Alternative Currency Bankers – According to Javelin Strategies, 20% of all online trades are already being done with alternative currencies. The stage is being set for next-gen alt-currency banks.

Waste Data Managers – To insure data integrity in today’s fast evolving information storage industry, multiple redundancies have been built into the system. Achieving more streamline data storage in the future will require de-duplication specialists who can rid our data centers of needless copies and frivolous clutter.

Privacy Managers – If you think you have lost most of your privacy already, we’ve only scratched the surface. We are all terminally human, and as such, we do not always make good decisions. Striking the perfect privacy-transparency balance will require far more than amateur insights. It will require a privacy professional.

See the full post from 2011 here. Some of these ideas might have seemed absurd a few years ago, but have already come began to be put into practice. Years ago Alvin Toffler warned,

Perhaps the greatest cost of wave conflict in America will be paid by the millions of children currently compulsorily enrolled in schools that are attempting to prepare them – and not very successfully at that – for jobs that won’t exist. Call that stealing the future.

The takeaway? Try something new as an antidote to paralysis or as Toffler also warned,“if you don’t develop a strategy of your own, you become a part of someone else’s.”